You are here: Home / Bribery 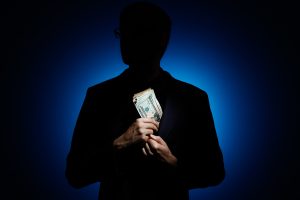 The intent of the provision under 18 USC § 201 is to impose prohibitions involving two acts constituting bribery. It is unlawful to commit the following acts that may result in the punishment of the giver and the receiver of the bribe.

Bribery is a form of public corruption that involves the public authorities. The essence of prohibiting the acts provided under 18 USC 201 is to prevent the fundamental threat to national security when the government authorities are corrupted. The Federal Bureau of Investigation can investigate any forms of corruptions. It may also be investigated within the organizational level, where the management can take the initiative of conducting its own internal investigation against its personnel and may file an official criminal charge of bribery under 18 USC 201.

18 USC 201 imposes the following penalties for bribery under the federal law:

Long-term prison sentence can sometimes be avoided in white collar crimes, such as a bribery pursuant to18 USC 201. Wall Street Prison Consultants specializes in helping federal and state offenders to obtain sentence reductions through programs that can help provide alternative solutions to long term incarceration. Our consultation services employ investigative and research processes to assist inmates and their lawyers in finding the best solution and alternatives available to reduce prison terms of an inmate. Discuss possible solutions to your issues today.